The surety, balance and capability Max von Stephanitz, the founder of the association, observed during the work of herders and their dogs with the herd became the impulse for the breeding of the German Shepherd as working dog.

On April 22nd, 1899, on the brink of a dog exhibition in Karlsruhe, Germany, the Verein für Deutsche Schäferhunde (SV) e.V. was founded. Max von Stephanitz was the association’s first president; his 61 cm-high male dog “Horand von Grafrath” (valued at 200 Deutschemark, a considerable sum at the time) received the number one in the stud book, in which today more than 2 million German Shepherds have been registered.

The breeding selection was realized systematically out of different herding dogs from the south and center of Germany and carefully planned according to the concept “shepherd breeding is working dog breeding”. Right from the beginning, the selection of the female breeding dogs was valued above all. Breeders were instructed to report not only individual animals, but complete litters to the pedigree office; therewith, the association turned a new page in the book of quality cynology. In the first years of pure breeding (crossbreeding with other breeds was out of the question for cynologist Max von Stephanitz), consolidated bloodlines formed through planned inbreeding. In doing so, the cynological and biologically well-versed founder of the association observed Mendel’s laws in order to recognize and avoid eventual dangers.

The German Shepherd’s learning ability, strength and stamina very rapidly turned the breed into an all-rounder and a versatile working dog. During World War I, the genetic variability was decimated significantly. About 7,000 German Shepherds were killed as telephone cable layers, messenger or medical service dogs.

After World War I, the association grew – even skyrocketed: at the beginning of the 1920, the SV was able to report the proud number of 57,000 association members. With the economic crisis, these numbers dropped again, but they had brought about a long-term change for the association: it was reorganized. Federal associations arose – as connecting link between local associations and the head of the association. The at that time newly founded breeding committee took over the concept of licensing breeding animals from the agricultural livestock production.

In 1933, the big change took place in Germany – also in dog matters. Independent associations were transferred to a “Reichsverband” (Reich Association). The breed was abused for propaganda purposes. Many thousand German Shepherds were used in the cruel World War II as messenger, gas detection and munition carrier dogs or even sacrificed as living bombs. The complete population was endangered.

Disastrous also for the SV: the separation between East and West

After World War II, first poverty determined the lives of the people in our country; nevertheless, the love for the German Shepherd was unbroken. In 1949, there were 40,000 association members again. Just as the division of Germany, the SV was also divided. In the German Democratic Republic (GDR), a so called section for service and working dogs was created. Especially disastrous for the German Shepherd breeders was something else, however – the final separation from the West German SV.

After the fall of the ‘Iron Curtain’, the German Shepherd lovers from East and West Germany came together astonishingly fast. Only few months after November 1989, the first GDR federal associations formed. On April 20th, 1990, the complete SV membership of the GDR joined the federal German SV.

In the following decades, a big German Shepherd fan community developed in the Federal Republic of Germany. ‘Inspector Rex’ was and is a TV cult figure with immense advertising impact for the breed.

The fascination for this breed is cross-border: in the World Union of German Shepherd Associations (WUSV), worldwide more than 500,000 members on each continent campaign for the breed. The international collaboration promotes a uniform breed standard.

The SV members are from all professional branches and social classes. They form the big SV family. Only commercial dog traders are excluded. With more than 50,000 members, the SV is the biggest breed kennel club of the world.

In Germany, the association is subdivided regionally into 19 federal associations. Around 1,800 local groups of the SV are the actual basis of the association. There, all members have the possibility to train their dogs optimally and do sports with them close to where they live and in case a problem comes up, always find a competent contact person.

Its complete structure makes the SV an especially democratically-formed association. In the end, the members of the basis decide via the election of delegates what happens and the repartition of responsibility in the organization.

The SV is furthermore member of the German Kennel Club (VDH), of the Fédération Cynologique Internationale (FCI) as well as of the World Union of German Shepherd Associations (WUSV). 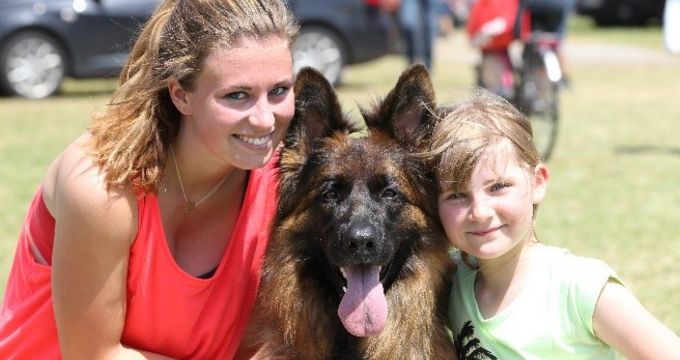